So last night a months’ worth of high quality football came to an end in what can only be described as ‘an okay game for a 0-0 draw’. In fact we didn’t see the first goal of the game until the 113th minute – and that goal would be enough to see the Germans secure their fourth world cup win.

Germany were forced to make a change before kick off as Sami Khedira injured himself during the pre match warm up meaning Christoph Kramer came into the squad to make his world cup debut, whilst Argentina decided to go with Higuain in their attack, leaving Aguero on the bench.

The game itself could have gone either way with Argentina’s Higuain missing their biggest opportunity in the first half after a mix up in the German defence saw him go through one-on-one with Neuer, however, he completely miscued his shot and that just about summed up his game. Kramer, Khedira’s replacement, had to be brought off in the first half as he took a heavy blow to the head which forced Löw to bring Schurrle on in his place. As half time approached the Germans finally got their big first half opening from a corner, but Höwedes hit the post before the ball bounced back out hitting Müller who was stood in an offside position, meaning they could not try and bundle the ball home from the rebound. 0-0 at half time, hopefully the second half would bring more goals…

It wouldn’t. The best chance of note in the second half fell to one Lionel Messi. Usually putting only the goalkeeper and the goal between Messi results in a goal, on this occasion he snatched at the chance. Truth be told I think a lot of people knew this game was heading for extra time long before the full time whistle.

The first half of extra time saw Germany up their tempo and they almost got their reward when André Schürrle fired a shot in. Sadly for him the shot was well saved by Romero in the Argentine goal.

Finally in the second half of ET we got the winning goal. Schürrle broke down the left before playing a chip through to Götze who took one touch before firing it perfectly past Romero. All they had to do now was hold on for just over 5 minutes.

They did – and are now the world champions. Congratulations to Germany, for me the best team in the tournament won it.

Oh and there was a ‘streaker’, so yeah… 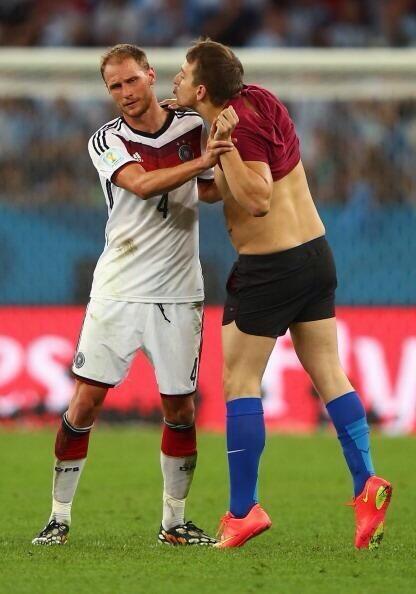